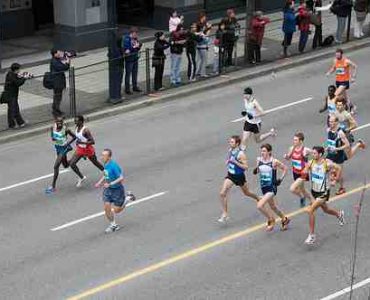 I’m into running at the moment. I would say ‘jogging’ but my brother would kill me. He’s a fit dude, a triathlete, with sickeningly high levels of will-power. Apparently jogging is for girly-girls and pensioners. What we do is run, dammit!

Despite questions recently as to whether running/jogging could be bad for you (or just French presidents), the medical evidence seems overwhelming that the benefits far outweigh the risks. Yes, its great for increased fitness levels, weight control, and reducing the long-term risk of cardiac problems. But I would suggest that it is also a powerful tool for heightening self-esteem.

Here’s how it yanks my chain:

(1) It connects me to my body. I’m not just a brain plugged into a computer. I am a free man, able to go where I want under my own power.

(2) It connects me to the real world of things. I don’t listen to music as I run. I use my senses to tune into the world around me.

(3) It allows me to feel powerful. There is something positive I can do now, without having to wait on anyone else’s pleasure or plan. Every run is a success in itself.

(4) It teaches me patience and progress. Every week I get a little stronger, a little faster. I can feel the development. I go forward. I look to the future.

(5) Surprisingly, exercise increases my energy levels. The more I give out, the more I get back. There’s a lesson in there somewhere…

(6) It keeps the depression deamons away. I don’t need government programs or medication, just a pair of running shoes and a road.

And it’s not just me.

People are using various methods of exercise to increase their well-being. One man claims that ‘World champ helped my mental health’. This is a story about former three times world boxing champion Duke McKenzie. He uses Boxercise in his gym to help people with poor self-esteem and depression. His program packs a mighty punch.

Then there is Football therapy – for the mentally ill. Football is particularly good for helping men kick depression into touch. It gets men out of the house and talking to each other – two vital components for male mental health.

Or if all this sounds a little too macho, try gardening to grow better mental health. The point is, do something!

The more I think about this, the more it appears clear to me that its the little things that count. Simplicity. Theories are not necessary. Just do it!

Do what? Here are 10 other ways to beat the blues. No excuses now.

One thought on “Fighting For Mental Health”