An Entrepreneur is a Hero!

Home » An Entrepreneur is a Hero! 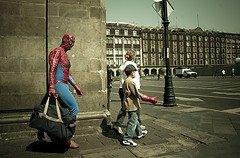 When you think of a hero, what sort of person comes to mind? Soldiers and warriors? Freedom-fighters and life-savers? Possibly the odd scientist or artist?

What if I said that an entrepreneur is a hero? What if I claimed that business is a heroic activity?

This idea isn’t new to me but it might be new to many people in the UK and Ireland, so I thought I should introduce it. Why? Because the popular sense is that we’re all sleazy fat-cats, dodgy Del Boy spivs, or brash loadsamoney yuppies. We’re portrayed as selfish and shallow. We contrast unfavourably with those real heroes in the public sector, who (so the story goes) sacrifice vast pay-cheques in order to serve the greater good.

The Russian-born American philosopher and novelist Ayn Rand isn’t a household name here. But her novels have sold millions and influenced millions all over the world. Check Amazon and you’ll find more than fifteen hundred reviews for her main work Atlas Shrugged.

Funny thing is, the main protagonists in her stories are industrialists, innovators, and even bankers! They are portrayed as heroic figures – men and women – who stand against a pseudo-benevolent but totalitarian state that ‘loots’ the profit and regard they are due for what they have created from nothing. In Atlas Shrugged, these heroes go in strike and let the world of the ‘parasites’ collapse!

Here’s how Rand described her own point of view:

My philosophy, in essence, is the concept of man as a heroic being, with his own happiness as the moral purpose of his life, with productive achievement as his noblest activity, and reason as his only absolute.

According to Rand, the individual “must exist for his own sake, neither sacrificing himself to others nor sacrificing others to himself. The pursuit of his own rational self-interest and of his own happiness is the highest moral purpose of his life.”

Rand defended liassez-faire capitalism, a minimal state, and had an almost reverential view of the value of money.

I hope I’ve stimulated your interest. And your pride. For remember – business is a work fit for heroes!

2 thoughts on “An Entrepreneur is a Hero!”